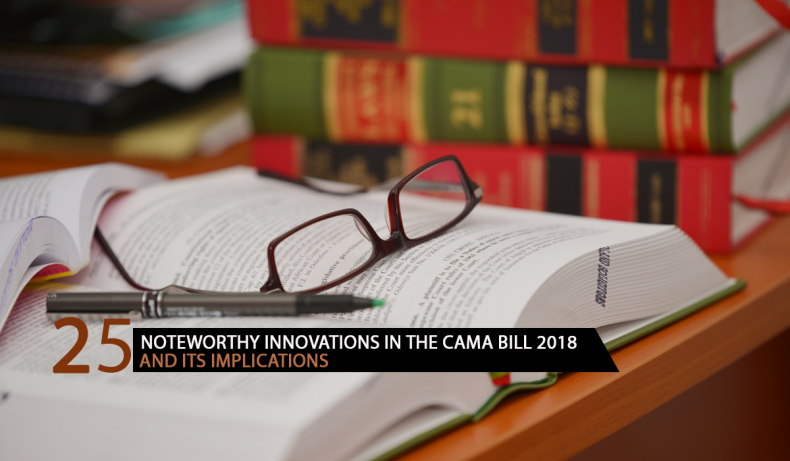 25 NOTEWORTHY INNOVATIONS IN THE CAMA BILL 2018 AND ITS IMPLICATIONS

CAMA BILL 2018: The Companies and Allied Matters Act 1990 (the “Current CAMA”) has been in force since 1990 and has governed commercial transactions in Nigeria since then till date except otherwise agreed by parties.

Several arguments have been posed by legal and commercial luminary as to the satisfactoriness of its provisions which has been described as not been in tandem with global trends and have been overtaken by events.

On the 15th of May 2018 the Senate passed a Bill for an Act to repeal and re-enact the Companies and Allied Matters Act 1990 (Cap.C20) Laws of Federal Republic of Nigeria 2004 (the “Bill”) which is an amendment to make the Act of a contemporary nature and relevant.

The Bill has 860 sections. An additional 247 sections was added to the Current CAMA of 613 sections. The Bill seeks to positively enhance the ease of doing business in Nigeria thus directly affecting the influx of Foreign Direct Investment (FDI) into Nigeria. It also favors small companies as less stringent reporting obligations have been put in place. There are also less cumbersome provisions in the Bill which will have a great impact on the growth of Small and Medium Scale Enterprises (SMEs). This article aims to discuss twenty-five (25) noteworthy innovations in the Bill and its implications.

INNOVATIONS IN THE BILL:

Model articles are contained in the schedules to the Bill to apply to every company by default unless expressly excluded or modified.

The need for Attorney General’s consent to the memorandum of an unlimited liability company or company limited by guarantee has been discarded and the new procedure for incorporation includes advertisement in three national newspapers.The Liability of its members have also been reviewed upwards to N100,00 from N10,000.

The proposed CAMA exempts companies that have not carried on any business since its incorporation or whose turnover in a financial year is not more than N10 million and the balance sheet total is not more than N5million from the requirement to have its accounts audited in respect of that financial year. Such a company must however not at any time within the financial year in question carried on business as an insurance company, a bank or such other company as may be prescribed by the Commission.

This provision is however not applicable to insurance companies or banks.

The Bill has impliedly abolished the mandatory requirement for each company to have a common seal. This can be seen from the various provisions of the proposed Act whichseem to have made the use of common seal to be optional.

“ have its name engraved in legible characters on its seal, where the Company has a seal; and”

A company can only acquire its own shares for some specified purposes. However, by virtue of the Bill, a Limited Liability Company may purchase its own shares including redeemable shares if so permitted by its articles and approved by the shareholders by special resolution.

In several provisions of the Bill, persons who hold nominal interest in a company on behalf of another are required to disclose those beneficial interests. Any shareholder (other than the beneficial owner) who holds shares entitling him to 5% voting rights in company should provide particulars of the beneficial owner to the company within 7 days.

The beneficial owner should also disclose whether persons interested in the same shares are parties to any agreement or arrangement relating to the exercise of any rights conferred by the holding of the shares.

Upon this disclosure, the company is to, within 7 days, inscribe against the name of every member in the register of members the information received and at the filing of its next annual return, notify the Commission of that information.

The Bill has made it easy to serve notice because in addition to the notice given personally or by post, notice may also be given by electronic mail to any member who has provided the company an electronic mail address.

CAMA BILL 2018: The proposed CAMA has established a committee whose main function is to provide the opportunity of being heard for persons alleged to have contravened the provisions of the proposed Act or regulations made thereunder; resolve disputes or grievances arising from the operations of this Act or its regulations; and impose administrative penalties for contravention of the provisions of this Act or its regulations in the settlement of matters before it. The decisions of the APC are subject to confirmation by the Board and parties dissatisfied with decisions of the APC may appeal to the Federal High Court.

Section 102 of the Bill provides that:

“A document or proceeding requiring authentication by a company may be signed by a director, secretary, or other authorised officer of the company, and need not be signed as a deed unless otherwise so required in this Part of this Act, provided that an electronic signature shall be deemed to satisfy the requirement for signing under this section.”

Under Section 251 of the Current CAMA, a company qualifies as a small company if:

Some of the exemptions applicable to small companies in the Bill are:

By virtue of the provisions of the Bill, small companies will no longer be mandatorily required to convene and hold Annual General Meetings.

However, Section 213 of the Current CAMA requires every company to hold Annual General Meetings on a yearly basis but not more than 15 months must lapse between the date of one AGM and the next.

Section 216 of the Current CAMAprovides that “all statutory and annual general meetings shall be held in Nigeria”, A private company may now hold its general meetings electronically provided that such meetings are conducted in accordance with the articles of the company.

The Bill removes the requirement for a company to have at least 2 directors and allows for single directorship for small companies.

Companies will now be permitted to provide financial assistance to their shareholders under the new Bill. The current position is that a company and its subsidiaries are prohibited from giving gifts, loans, indemnities, credit or other assistance for the purpose of aiding a person to purchase the company’s shares, where such financial assistance would result in a reduction in the net assets of the company or result in the company having no assets.

Similarly, it will now be an offence, punishable by a penalty to be specified by the Commission in its regulations, for any officer, insider or director of a company, or any other person acting under the direction of such officer, insider or director, to take any action to influence, coerce, manipulate or mislead any external auditor engaged in the performance of an audit of the financial statements of that company for the purpose of rendering such financial statements misleading.

The provision for issuance of shares at a discount is virtually redundant considering that the nominal value of the shares of most Nigerian Companies (usually 1 naira for private companies and 50 kobo for public companies) is so low.

The Bill provided for a new form of legal entity known as Limited Liability Partnership. This is a model structure that affords the flexibility of a partnership but clothed with the legal protection afforded companies. Two or more persons associated for carrying on a lawful business with a view to profit may form or incorporate a limited liability partnership under the Act as a legal entity separate from that of its partners and having perpetual succession

There is a requirement to notify CAC of a disclosure of a substantial shareholder with 5% interest/equity stake in public company.

The Bill enhances minority shareholder rights. It confers rights on shareholders to bring derivative action both in respect of a company and any of its subsidiary companies and other companies related to the parent company.

This provision largely favors the small scale businesses. By virtue of Section 18 (2) of the Bill, one person may form and incorporate a private company by complying with the requirements of the proposed CAMA in respect of private companies.

A requirement of registration of Company in Nigeria is the submission of a statutory declaration of compliance (CAC4). By virtue of Section 35 (3) of the 1990 CAMA

“A statutory declaration in the prescribed form by a legal practitioner that those requirements of this Act for the registration of a company have been complied with shall be produced to the Commission, and it may accept such a declaration as sufficient evidence of compliance.”

By this provision, only a legal practitioner could fill the prescribed form CAC4

In Section 40 of the proposed CAMA, ‘Statutory declaration in the prescribed form by a legal practitioner…’ has been tactically removed and substituted with “A statement of compliance…”.

The Bill has expressly prohibited bearer shares. According to the Section, no company has the power to issue bearer shares. The section further explains what a bearer share is to mean “a share which is represented by a certificate, warrant or other document (in any form or by whatever name called) which states or otherwise indicates that the bearer of the certificate is the owner of the shares.

“that the register of directors should contain the full name and any former name or names, service address, nationality, business occupation (if any), date of birth, phone number…”

In line with the general best practices and the need for privacy, the Bill has put several measures in place to protect information relating to the director, particularly as contained in the register of directors.Section 322 of the Bill makes provision for protecting a company director who is an individual. Forthwith, information as to a company director’s usual residential address, or that his service address is his usual residential address are classified as “protected information”. The information does not cease to be ‘protected information’ because the individual has ceased to be a director of the company.

The need to establish Nigeria as the African hub for the set up and the operation of businesses cannot be over emphasized. There is need to incorporate regulatory conditions which are modeled around international best practice. The Bill will indeed promote long-term investments and ensure that the Nigerian system of company law and corporate governance would be favorable to the emerging Nigeria.